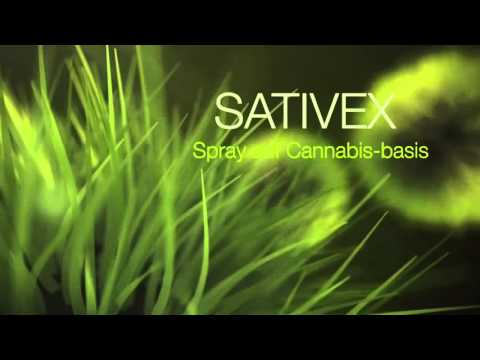 Sativex is a balanced hybrid.

Nabiximols, commonly known as Sativex, is a specific extract of Cannabis approved as a botanical drug in the United Kingdom in 2010. It is administered as a mouth spray to alleviate neuropathic pain, spasticity, overactive bladder, and other symptoms of multiple sclerosis. Developed by the UK company, GW Pharmaceuticals, Sativex is a pharmaceutical product standardized in composition, formulation, and dose. Its principal active cannabinoid components are the cannabinoids tetrahydrocannabinol (THC) and cannabidiol (CBD).

Sativex is the first pharmaceutical drug made with ingredients extracted from the cannabis plant. Sativex contains an equal 1:1 ratio of THC and CBD. It also contains a variety of other cannabinoids and terpenes.

GW Pharmaceuticals and Bayer came into an exclusive marketing agreement in May 2003 for GW’s cannabis-based medicinal extract product, to be marketed under the brand name Sativex. In April 2011, GW licensed to Novartis the rights to commercialize nabiximols in Asia, excluding China and Japan, and in Africa and the Middle East, excluding Israel.

In June 2010, the Medicines and Healthcare products Regulatory Agency of the United Kingdom licensed nabiximols as a prescription-only medicine for the treatment of spasticity associated with multiple sclerosis (MS). This regulatory body represents the world’s first full regulatory approval for the medicine. Bayer Schering Pharma is marketing the spray in the UK. Many people with MS cannot access nabiximols because of the local National Health Service (NHS) resistance to its funding. However, in August 2014, the NHS in Wales agreed to fund Sativex for people with MS.

Spain approved nabiximols for MS spasticity in 2010, and was launched in that country in March 2011. It was approved in the Czech Republic in April 2011, in Germany in May 2011, in Denmark in June 2011, and in Sweden in January 2012 to people with MS who have not responded effectively to other medications for spasticity. Nabiximols will be marketed by Almirall in Spain and other European markets except the UK.

Health Canada approved nabiximols for the treatment of MS spasticity in Canada. It has also received a license with conditions (NOC/c) for two additional uses namely, as adjunctive treatment for the symptomatic relief of neuropathic pain in multiple sclerosis, and for pain associated with cancer.

Nabiximols is available in several countries as an unlicensed medicine. Doctors prescribe the product to people who they consider may benefit. Today, UK exports nabiximols to twenty-eight countries.

In 2013, France legalized the use of cannabinoids in medicine, and Sativex is the first one to be sold under prescription. Not until June 2016, this drug was never actually sold in pharmacies there.

Sativex is quite expensive and is only available by prescription in certain countries like Canada, Australia, the United Kingdom, and Spain. This product is not yet available in the United States, but is currently awaiting FDA approval as a treatment for cancer pain.

Sativex comes as a peppermint flavored mouth spray. Each 100-microliter spritz provides 2.7mg of THC and 2.5mg of CBD directly to the mouth, tongue, and cheeks. The active ingredients are absorbed into the bloodstream through the inner linings of the mouth.

The method of administration of Sativex allows it to take effect almost immediately. Edibles can take up to an hour to take effect since they must be digested before the cannabinoids can enter the bloodstream.

Like many pharmaceuticals, Sativex still has side effects despite being a highly researched and specialized product. In clinical trials, some patients reported anxiety, mood changes, and paranoia. However, these effects were relatively mild and well tolerated, and quickly subsided with discontinued use of the drug.

The effects and benefits can take up to two weeks of experimentation with varying dosages and timings of dosages to find the ideal treatment schedule.

Sativex can stop muscle spasms in people with MS. It also reduces nerve pain and improves sleep. Containing an even mix of THC and CBD, the two cannabinoids in Sativex have a synergistic effect when consumed together.

Sativex also contains many terpenes, the chemicals that give each strain of cannabis its unique smell and flavor. Different terpenes are associated with different flavors including fruit, nut, pine, wood, and citrus. These terpenes also enhance the medical benefits of THC and CBD.

There are only a few approved therapeutic uses for Sativex, so far. Its primary use is for treating muscle spasms due to MS, but it can also treat several other MS symptoms. It is also approved in some countries for pain relief.

Several clinical studies confirm the efficacy of Sativex at treating muscle spasms associated with MS. A 2007 study observed 189 MS patients using Sativex found evidence to support the long-term effectiveness and tolerability of the drug at treating resistant forms of MS. Almost half of the patients taking Sativex showed a significant reduction in spasticity symptoms.

Sativex is not the only treatment for MS, and should be used with other prescribed treatments. It is recommended for patients who have not responded well with conventional treatment options and are looking for an alternative.

Sativex can be useful for easing insomnia caused by pain. A meta-analysis in 2007 looked at 2,000 patients using Sativex and found it was effective in improving sleep for people with a wide variety of pain conditions including cancer and rheumatoid arthritis.

A study looked at 58 rheumatoid arthritis (RA) patients. The patients had no history of psychiatric disorders, substance misuse, epilepsy, or severe heart, kidney, or liver problems.

First, patients rated their pain while they are at rest, during movement, and first thing in the morning. They also rated their quality of sleep. Next, the patients were given one of two sprays to use every evening for about a month. Sativex was one of those sprays and the other was an empty spray, a placebo.

Sativex was given to 31 patients and the other 27 patients got the placebo. No one knew which patients had gotten Sativex.

Patients taking Sativex had notable improvements in pain including pain during movement and pain at rest, sleep quality, and RA disease activity. Morning pain didn’t change much but was “surprisingly low” to begin with.

The sprays were only used in the evening to minimize any intoxication. The most common side effects with Sativex were dizziness (8 patients, or 26% of the Sativex group), dry mouth (4 patients, or 13%), and lightheadedness (3 patients, or 10% of those taking Sativex).

Sativex shows great potential as a treatment for not only symptoms of MS, including muscle spasticity, but also for sleep disturbances and pain associated with rheumatoid arthritis. The oral spray delivers the medical benefits of THC and CBD in a standardized dose.